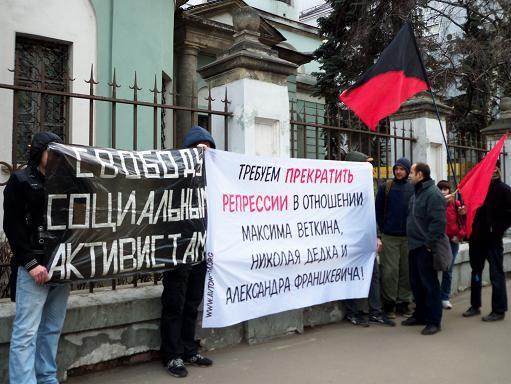 From International of Anarchist Federations:

It has been a long time since the last call for solidarity with the Belarusian anarchists appeared. Today we have to admit that the new wave of solidarity is needed urgently to help them out from the prison.

That’s why we call you to participate in days of action in solidarity with Belarusian political prisoners on 22nd-23rd of September (parliament election day is 23rd) .

From our comrades at Bristol Afed:

Belarusian anti-authoritarian activists; Ihar Alinevich, Mikalai Dziadok, Artsiom Prakapenka, Pavel Syramolatau, Aliaksandr Frantskievich, Jauhen Vas’kovich were sentenced to 3 to 8 years in prison for a series of attacks on state and capital symbols, and are finishing their second year inside.  In October 2011 they were acknowledged as ‘political prisoners’ by rights-watch organisations. This improved their chances to be freed, as the President of Belarus, Alexander Lukashenko, faces pressure from the European Union to free all political prisoners. He has already pardoned more than 30 of them, but none of our anarchist comrades were granted freedom.

There are currently 15 people listed as ‘political prisoners’ in Belarus, Lukashenko has stated that he will freeonly those who write a petition for pardon, admitting their guilt and asking him personally for mercy.  Five of the inprisoned activists have refused to sign, whilst Artsiom Prakapenka signed it under pressure but remains in prison. All the remaining ‘political prisoners’ are under pressure from the prison authorities to sign the petitions. Methods to attempt to force them to do soinclude; transfers to other penal institutions, preventing food supplies coming in, preventing and limiting visits from relatives, denying phone calls, delays and gaps in the receipt of letters, solitary confinement, transfer to a penal facility with a ‘special regime’, etc.

The anarchists federations that met together at the IAF Congress in St. Imier, Switzerland strongly oppose the fact that our comrades are now being traded for benefits from the EU and condemn the pressure that they have been experiencing. We call on everybody to protest on the 22nd and the 23rd of September [the day of the Belarusian elections] against these tortures and demand the immediate liberation of all political prisoners of Belarus, including anarchists and democracy campaigners. (includes excerts from statement by the International of Anarchist Federations).

A demo in London has already been announced, and we hope to have some more actions around the UK, including in Bristol.

On September 23rd the Republic of Belarus will hold parliamentary elections. It is an event that is on everyone’s mind but for all the wrong reasons. The Belarusian parliament is an illusion with the decisions being made solely by the president. The upcoming elections appear only to be of importance to Lukashenko as most Belarusians have given up hoping for any real changes in the country’s politics.

Whilst Lukashenko is following all of the democratic procedures in an attempt to legitimise his presidency, the country’s prisons are still holding political prisoners. Opponents of Lukashenko’s power – who at some time in their activist life became too dangerous to the regime – are now being held in camps where they are subjected to constant harassment. Even though they have only been charged with minor offences, they are being treated as dangerous criminals.

Political prisoners are being denied their right to see family members and to receive food parcels and are often being put into solitary confinement. At the same time prison guards are attempting to turn other inmates against them as was commonly done during the USSR.

Lukashenko has tried to use the imprisonment of political activists to get on the good side of the USA and the EU, however, neither the United States nor the European Union want anything to do with the president until the political prisoners are released.

Lukashenko must know that not only the “western leaders” are unhappy with the country’s politics but also ordinary people around the world.