[Note: This article was originally published on September 5th though it only came to our attention recently. We are re-posting it now for clarification and to keep everybody up-to-date with the developments in the California Prisoner Hunger Strike. Apologies for the delay.] 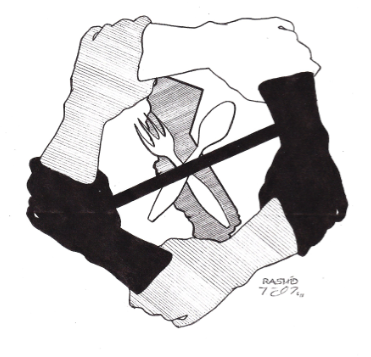 Greetings of Solidarity and Respect!

The PBSP-SHU, Short Corridor Collective Representatives hereby serve notice upon all concerned parties of interest that after nine weeks we have collectively decided to suspend our third hunger strike action on September 5, 2013.

To be clear, our Peaceful Protest of Resistance to our continuous subjection to decades of systemic state sanctioned torture via the system’s solitary confinement units is far from over. Our decision to suspend our third hunger strike in two years does not come lightly. This decision is especially difficult considering that most of our demands have not been met (despite nearly universal agreement that they are reasonable). The core group of prisoners has been, and remains 100% committed to seeing this protracted struggle for real reform through to a complete victory, even if it requires us to make the ultimate sacrifice.  With that said, we clarify this point by stating prisoner deaths are not the objective, we recognize such sacrifice is at times the only means to an end of fascist oppression.

Our goal remains: force the powers that be to end their torture policies and practices in which serious physical and psychological harm is inflicted on tens of thousands of prisoners as well as our loved ones outside.  We also call for ending the related practices of using prisoners to promote the agenda of the police state by seeking to greatly expand the numbers of the working class poor warehoused in prisons, and particularly those of us held in solitary, based on psychological/social manipulation, and divisive tactics keeping prisoners fighting amongst each other. Those in power promote mass warehousing to justify more guards, more tax dollars for “security”, and spend mere pennies for rehabilitation — all of which demonstrates a failed penal system, high recidivism, and ultimately compromising public safety.  The State of California’s $9.1 billion annual CDCR budget is the epitome of a failed and fraudulent state agency that diabolically and systemically deprives thousands of their human rights and dignity. Allowing this agency to act with impunity has to stop! And it will.

With that said, and in response to much sincere urging of loved ones, supporters, our attorneys and current and former state legislators, Tom Ammiano, Loni Hancock, and Tom Hayden, for whom we have the upmost respect, we decided to suspend our hunger strike.  We are especially grateful to Senator Hancock and Assembly Member Ammiano for their courageous decision to challenge Governor Brown and the CDCR for their policies of prolonged solitary confinement and inhumane conditions. We are certain that they will continue their fight for our cause, including holding legislative hearings and the drafting legislation responsive to our demands on prison conditions and sentencing laws. We are also proceeding with our class action civil suit against the CDCR.

The fact is that Governor Brown and CDCR Secretary Beard have responded to our third peaceful action with typical denials and falsehoods, claiming solitary confinement does not exist and justifying the continuation of their indefinite torture regime by vilifying the peaceful protest representatives. They also obtained the support of the medical receiver (Kelso) and Prison Law Office attorney (Spector—who is supposed to represent prisoners interests, and instead has become an agent for the state) to perpetuate their lie to the public and to the federal court — that prisoners participating in the hunger strike have been coerced — in order to obtain the August 19, 2013 force feeding order.

We have deemed it to be in the best interest of our cause to suspend our hunger strike action until further notice.

We urge people to remember that we began our present resistance with our unprecedented collective and peaceful actions (in tandem with the legislative process) back in early 2010, when we created and distributed a “Formal Complaint” for the purpose of educating the public and bringing widespread attention to our torturous conditions.

After much dialogue and consideration, this led us to our first and second hunger strike actions in 2011, during which a combined number of 6,500 and 12,000 prisoners participated. We succeeded in gaining worldwide attention and support resulting in some minor changes by the CDCR concerning SHU programming and privileges. They also claimed to make major changes to policies regarding gang validation and indefinite SHU confinement by creating the STG/SDP Pilot Program. They released a few hundred prisoners from SHU/AD SEG to general population in the prison.  But in truth, this is all part of a sham to claim the pilot program works and was a weak attempt to have our class action dismissed. It didn’t work.

In response we respectfully made clear that CDCR’s STG-SDP was not responsive to our demand for the end to long term isolation and solitary confinement and thus unacceptable.  (See: AGREEMENT TO END HOSTILITIES)

Our supporting points fell on deaf ears, leading to our January 2013 notice of intent to resume our hunger strike on July 8, 2013 if our demands were not met.  We also included Forty Supplemental Demands.

In early July, CDCR produced several memos notifying prisoners of an increase in privileges and property items, which are notably responsive to a few of our demands, while the majority of our demands were unresolved, leading to our third hunger strike, in which 30,000 prisoners participated and resulted in greater worldwide exposure, support and condemnation of the CDCR!

From our perspective, we’ve gained a lot of positive ground towards achieving our goals.  However, there’s still much to be done.  Our resistance will continue to build and grow until we have won our human rights.