Support has been growing recently for young imprisoned student Edward Woollard, with both a Facebook campaign and a new support website. 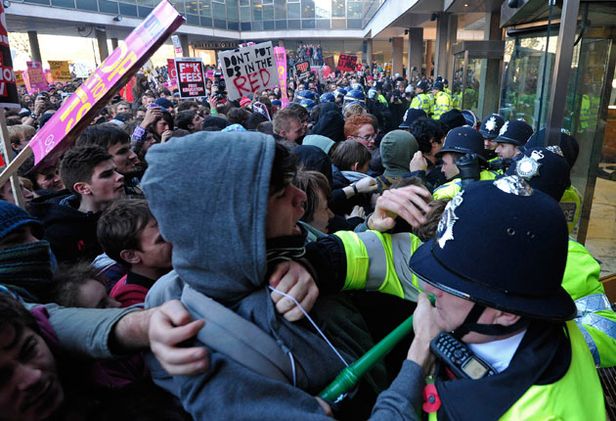 Woollard was sentenced to 32 months in prison after dropping a fire extinguisher off the top of the Tories Millbank Towers back in November 2010, after it was stormed by students furious about education and EMA cuts. Villified by the media, its worth noting Woollard didn’t actually hurt/hit anyone, soon expressed his apologies, and had no previous convictions. His sentence was undoubtedly political – the politicians needed a ‘criminal’ to make an example of, and put other students off protesting. That hasn’t worked though has it. Of course the media made much of the fact he might have, or nearly, hit someone ie a cop. But he didn’t. I nearly wiped out a PCSO on the Bristol to Bath bikepath the other day, when the idiot stepped out in front of my bike, but somehow I missed, and I haven’t received 32 months (yet).

Woollard and all the other students facing court and/or currently on bail deserve all the support we can give them. If you are facing state repression after student demos, a good place to look first for legal support (if you need it) is the Green & Black Cross.

Met cops cough up over £110K so far for G20 protests
According to reports resulting from Freedom of Information requests, the Met Police have so far paid out over £110K to protesters since the G20 protests in London in April 2009, in order to keep around 30 cases out of court. In a contradictory comment, a Met Police Authority spokesperson said “The decision to settle does not imply that the officers involved have done wrong. Each case is considered on its merits.” Yeah, of course.

One wonders what they might end up paying to the family of Ian Tomlinson, who died after assaults by cops in the area, and he wasn’t even part of the protests! With more than 4 enquiries going on into the policing of recent student & youth protests in London last year, which were roundly condemned for their ‘kettling’ and other malpractices, the Met face paying out a shed load more. Given their budget cuts, this will hopefully mean even less cops on the streets in the months to come. 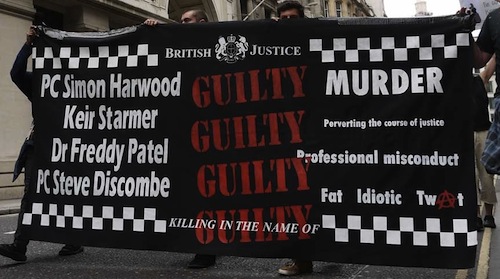 However, whilst tens of protesters faced charges after the G20, and over 300 have been arrested as a result of the student protests, guess what – not a single cop has faced any charges whatsover. What a surprise! Met thug PC Simon Harwood, who assaulted Tomlinson shortly before his death, also escaped any form of prosecution. Indeed the inquest into Tomlinson’s death wont even start until 28 March this year, nearly 2 years after the event, and is expected to last about 5 weeks. Should we expect another cover-up?