Marco Camenisch, 58 years old this Thursday, has spent 20 of the last 30 years in prison for his political actions, and has at least another 8 years to do. For the 10 years he was not in prison, he lived on the run, clandestinely, in Italy, Switzerland and elsewhere. Recently, in late December, he participated in a global hungerstrike by some 15 anarchist prisoners to draw attention to their struggle and affirm their resistance to state repression.

The following article has been translated from the Italian website set up to support Marco, and gives a brief history of his life and motivation (any links & highlighting have been added by translator): 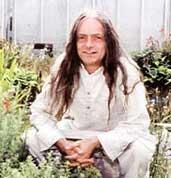 “Marco Camenisch was born on 21 January 1952 in Switzerland, in a small village of the Graubunden region. At the beginning of 1980 Marco was arrested for damaging electricity pylons and transformers, once against the NOK company (which ran nuclear power plants in Switzerland) and once against their distributors, the Sarelli company. The sentence was very harsh: 10 years. Marco was well aware this reflected the seriousness of what was at stake: the ecocide perpetrated by the the power industry as part of the wider system of destruction, which formed the target of his own struggle.

In December 1981 Marco escaped from Regensdorf prison with 5 other inmates and went into hiding for 10 years. In November 1991 he was arrested again following a routine ID check in the town of Massa, Tuscany, in Italy. There was a shooting after one carabiniere saw that Marco had a gun and panicked, Marco and one carabiniere were injured. This time Marco got a 12-year sentence for injuring the carabiniere and for another attack against the power lines between La Spezia and Acciaiolo, which transported energy produced by French nuclear plants. He did 11 of the 12 years in Italy, waiting to be extradited to Switzerland. 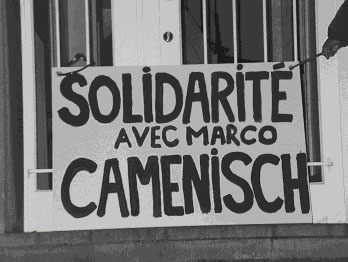 2003: banner at Swiss chamber of commerce in Brussels

In May 2002 Marco was subjected to a show-trial designed to politically damage the wider struggle against ecocide, and to punish Marco for his defiance in showing no remorse for his actions. In flagrant disregard for the state’s own legal process, Marco got charged and convicted for the murder of a completely different Customs policeman in 1989 in Brusio, and sentenced for 17 years. With this sentencing the Lords of the Atom and their accomplices “settled the score” with Marco – including the previous 10 and 11-year sentences – a total of 39 years of imprisonment. Longer than a life sentence.

In May 2007 the sentence was reduced to a maximum of 8 years, with release scheduled to be in May 2018. Even when jailed, Marco has never stopped fighting and will keep struggling against the stranglehold of the corrupt system, a system that tries to break him, and smash the support for him in the wider struggle that sustains him.

Over the long years of the harsh realities of imprisonment, another reality has also been created, of human relationships, solidarity, support – networks in Italy and around the world have grown and developed around Marco – comrades who have been inspired by his words and actions, or who have known him as a friend, brother or comrade. This network might now seem to be fading but it will never be broken, and it will in turn create new networks and forces.

During these years Marco has always been with us, even though physically separated, his presence is still felt in our struggles. His voice, his thoughts, his translations, his articles and hunger strikes demonstrate a solidarity free from every ideological dead-end and dogma, that has created a network of communication and solidarity with revolutionary prisoners all around the world. His prodigious output has contributed to the growth of our journey of struggles against every oppression and exploitation, in defence of the Earth and all living beings.

Marco has never resigned himself or surrendered himself to his imprisonment, or accepted the dominance of the current system. He has never departed from his revolutionary journey, has continuously demonstrated a coherence and clarity of thought, spirit, and heart, rare qualities in this era of fake human relationships and political lifestylism. And this spirit is what the system tries so hard to break, his green anarchist identity, and the network of relationships that have formed around him. The harsh price that Marco is still paying is the same price that every single revolutionary prisoner around the world is paying in jail.

It is therefore urgent and necessary for us to support him once again, with the awareness that only an international mass mobilisation can hope to fight against the war of annihilation perpetuated by all governments, not just the Swiss state. This is why we have created a website to give voice to Marco’s thoughts and provide updates on his situation, with the view of nurturing an international mobilisation to support him. Marco must be released! To demand Marco’s release after 30 years is to demand an end to the exploitation of all human beings, all other beings and of all Nature.”