Elijah (James) Smith has now been locked up on remand for one year, ever since his arrest last 18 January 2009 after the EDO/MBM ITT factory in Brighton was trashed by 6 campaigners from Bristol. His and the other 5’s trial for that action commences on May 17 in Brighton (along with 3 other people from Brighton allegedly implicated in the action), however he faces being held on remand at least until his trial for the Raytheon 2 (formerly 3) starts in Bristol in early September. 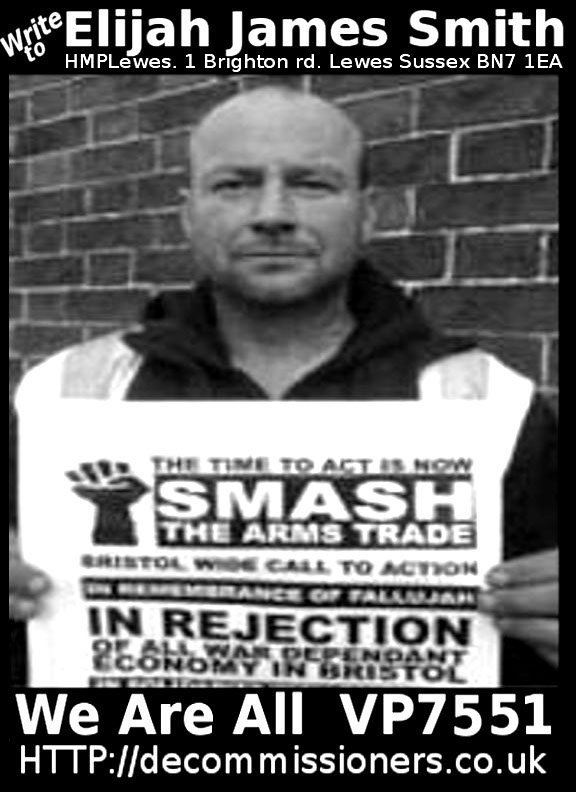 new poster created by a supporter

It is clear that he is not just a political prisoner, but a prisoner of the war being waged by capital and the state against just about everyone else – from workers struggling to survive the recession to campaigners fighting for their causes. Quite simply, big business cannot allow people like him to go free if they can avoid it, because it would mean he is free to continue his struggle, and encourage others to do likewise. So they keep him locked away in a shitty little cell as punishment to him, and as a warning to others. Compare and contrast that treatment with that of the family of Ian Tomlinson, who was violently assaulted by a police officer minutes before he died at last year’s G20 protest.

Of course this tactic only works to a degree. The British state cannot completely disappear him (well not yet anyway), and many other people quickly learn to employ measures designed to ensure they do not get arrested, such as this example. Plus of course, we have seen the campaign against EDO in Brighton, and other manufacturers of military weapons elsewhere, continue and spread. Yesterday, Monday, saw the latest mass demo against EDO in Brighton – report and photos, while other smaller protests linked to the campaign targetting Barclays banks in places like Kernow, Nottingham, and Cambridge, with a small Barclays picket in Bristol. Meanwhile in Bristol on Saturday, supporters of the defendants held a latest fundraiser for the campaign. Over £400 was raised, which is pretty good on a wet night when many people are skint – respect to all those involved.

One disappointment however is that we as a movement are not yet able to apply enough pressure to get our prisoners freed, and the level of active solidarity with defendants and prisoners remains low. With arrests, bail conditions, detentions and prison being increasingly used in the ongoing social war, this is a situation we all need to work at improving. There are many ways to do this, starting with letters, faxes and emails to our so-called elected representatives, and the institutions; moving up through the levels with info and propaganda, protests, pickets and occupations, and other direct actions. Plus of course there is direct contact with the prisoners – info here on writing and sending items in; useful info on the prisons is here.