As we slowly reassemble ourselves back here in Bristol after the winter holidays, news filters in of some New Years Eve prisoner solidarity actions here and abroad.

Here in Bristol it is confirmed that at least 20 anarchists paid a late night visit to Bristol prison up in Horfield, where a quantity of fireworks were let off. Comrades then melted off into the cold night. We understand this action was carried out specifically in solidarity with those activists still locked up after the Copenhagen climate protests earlier in December, and more generally with all political prisoners. Nice one! 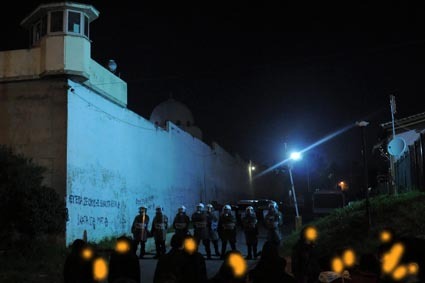 In Europe there is a long tradition of prisoner solidarity protests outside prisons on new years eve, and in recent years anarchists in Greece have been keen proponents of this tactic. This year was no different, with protests known to have occurred outside Korydallos prison (Athens), Volos (Central Greece) and Alikarnassos (Crete). Slogans included ‘Freedom to all that are in the prisons’. There is a report and video link at Occupied London blog, with further links to photos. Also linked to Greece, a further appeal has been issued for solidarity with Christos Stratigopulos, and Alfredo Bonanno, arrested last autumn for allegedly trying to expropriate funds from a bank. You can read the full solidarity call here on UK Indymedia.

Further afield, some 500 prisoners rioted on new years eve at Chachapoyas prison, about 650km northeast of Lima in Peru, in protest at worsening conditions. 6 hostages were taken and only released after negotiations with senior state officials.

Its going to be a busy year on the prison front, in more ways than one.