Back on 20 December, at the Bristol EDO Decommissioners solstice fundraising cafe at kebele social centre, a card was produced for Elijah (James) Smith by a Bristol ABC activist, and all present were asked to send him a seasonal and new year message. Elijah of course is still locked up in prison, now nearly for 1 whole year on remand, innocent until proven guilty – but locked away anyway by the state.

Well the card was sent, and on xmas eve Elijah penned a reply, that has now been received in the post. Here’s what he had to say:

“Hola kebeleites!
Thanx for the card. Its on the wall. I can hardly see the walls now, this is good. Its quite xmas-ish here. There’s a Burglar Bill type fella who keeps singing one line ‘Five – gold – ri-ngs!’ He doesn’t seem to express any interest in the rest of it. Its very funny even after a week.

I’m, sort of, watching Narnia while I’m writing this. I’m renaming it the Cat, Babe & Cupboard. Aslan’s a dictator. The Ice Queen is hot. Sick and twisted. The goat’s an informer. Its all wrong. Santa Claus has turned up now, another wrongun! He’s giving the posh kids knives and weapons. Whassalltha’ about!?

I hope you are all having it good for consumermas. It might be all a bit on the wrong side but its great fun. Have one for me, single malt straight an lots of it.
Go well, take care. Solidarity.”
(the original is posted up on the noticeboard at kebele social centre) 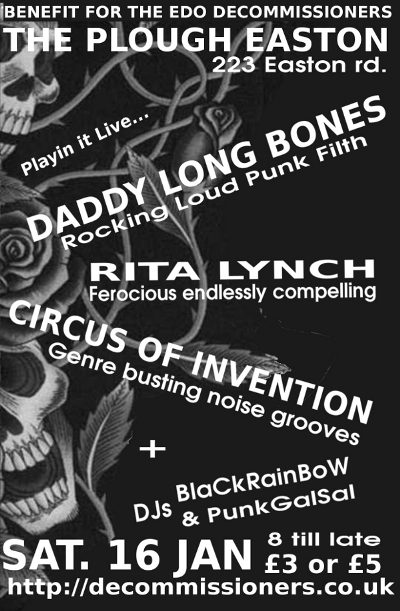 Benefit night on 1st anniversary of the EDO action

As for the rest of the Decommissioners, there is still over 4 months until their trial starts on May 17. Coming up soon on the weekend of 16/17 January it will be exactly one year since they decommissioned the EDO/ITT factory in Brighton. On the 16th there will be a fundraiser for the campaign at The Plough in Easton. On the 18th there’s a big protest in Brighton on the anniversary of both the action and the end of the Israeli bombing campaign of Gaza, full details here. There may also be protests in Bristol on the 18th we hear, by those unable to get to Brighton.
Solidarity to all!