From Anarchist News…
An international week of actions has been called for 10th – 16th of January, 2011 in support of the Reykjavik Nine, nine individuals including anarchists and radical leftists, who face up to 16 years in prison for protest against the Icelandic parliament.

In December 2008 the bullet that killed Alexandros Grigoropoulos set fire to the streets of Athens, a fire that soon spread to every city across Greece. That same December on the opposite shore of Europe, in Iceland another revolt was already under way born out of the wreckage of the economy that had collapsed that fall. 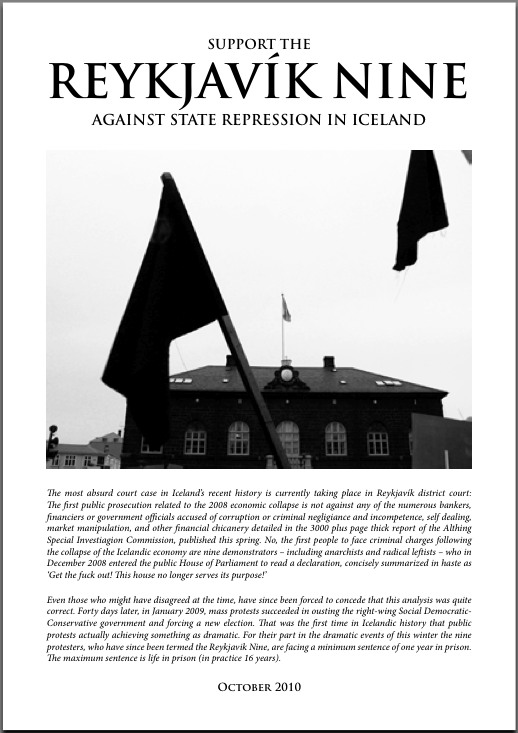 In the winter of 2008, Iceland, the first ‘victim’ of this global crisis, was witness to the largest mobilization in its history. Demonstrations, mass gatherings and popular assemblies, direct action and confrontation on a daily basis and finally mass riots managed to bring down the right wing government at the time. But, just like in Greece that bullet was only one cause to a revolt that had a thousand reasons behind it, in Iceland the bubble that burst that fall was only the spark for the pent up rage and frustration resulting from two decades of neoliberal government – and well, against the political and economic system in its entirety.

As we speak, the Icelandic state threatens with imprisonment nine individuals chosen to be the scapegoats of the uprising that brought down the government in January 2009. They are the Reykjavik Nine. 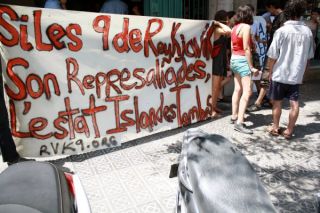 The final hearing in the RVK9 case is taking place in Reykjavik city court on the 18th, 19th, and 20th of January 2011. An international week of actions in support of the RVK9 have been called for the week before the trial, 12th – 16th of January. For this small island state at the periphery of Europe, any negative attention from abroad deeply hurts the authorities, the elite and the corporate media. For this reason it is imperative that we give them all the negative attention they deserve so that the Icelandic authorities know that the world is watching them, so that they know that there will be serious consequences for them at the event of a conviction for the Reykjavik Nine! List of Icelandic embassies.

We call for ALL kinds of solidarity actions to the Reykjavik Nine and against the Icelandic state! SOLIDARITY IS OUR WEAPON!
MORE INFO: Read full callout. See support website. Check out Saving Iceland. Previous post on this blog.