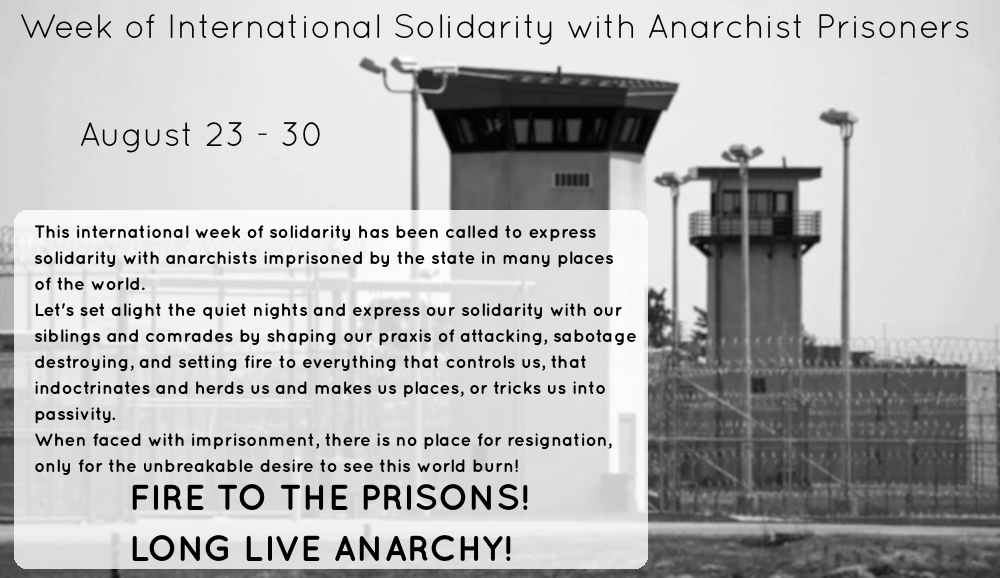 For the last two years, August 23-30 has been the Week of Action for Anarchist Prisoners. Many imprisoned anarchists will never be acknowledged as ‘political prisoners’ by formal human-rights organisations, because their sense of social justice is strictly limited to the capitalist laws which are designed to defend the State and prevent any real social change. At the same time, even within our individual communities, we know so little about the repression that exists in other countries, to say nothing of the names and cases involving many of our incarcerated comrades.

We chose August 23 as a starting point, because on that very day in 1927 the Italian-American anarchists Nicola Sacco and Bartolomeo Vanzetti were executed in prison. They were convicted of murdering two men during an armed robbery at a shoe factory in South Braintree, Massachusetts, United States. Their arrest was a part of a bigger anti-radical campaign led by the American government. The State’s evidence against the two was almost totally non-existent and many people still today believe that they were punished for their strong anarchist beliefs.

Therefore, we call on Anarchists and those fighting against the state to remember those inside by dedicating an action or an infonight to them, or simply by writing a letter.

Please send reports of your activities to tillallarefree (A) riseup.net