The first week of the trial of the EDO Decommissioners was dominated by questionning of EDO boss Paul Hills, who was in the dock from Tuesday to Friday, and will be back again on Monday. He did not have a pleasant time as the defence team dug into what exactly EDO get up to, and with who. He was openly accused of lying by the defence, and at one point was warned by the judge of the risks of perjuring himself. Of interest to anti-militarists will have been discussions around export licenses and the inter-connected nature of the international arms trade, along with its links into political patronage. Also worth noting was the judge’s ruling that the jury be given as background info a very brief summary of the Goldstone report into Israel’s bombing of Gaza in 2008/9.

Defendants were believed to have been pleased with how the first week went as the trial finally got going after a 17 months wait, and they were able to sit back and watch Hills sweat. Of course they too will soon be up for questionning, but we trust their integrity and committment wil shine through! Defendants were further boosted by the good news from the Raytheon 11 trial in Belfast that ended on 4 June with 9 acquittals and 2 minor convistions, following 3 previous acquittals. Report here.

At the beginning of the week one defendant, Robert Alford, chose to plead guilty as expected. However the judge decided he should remain on remand and will not be sentenced until the trial of the other 8 defendants ends. Although displeased at being kept on remand, this does mean Alford could benefit in the event the others are found not guilty. 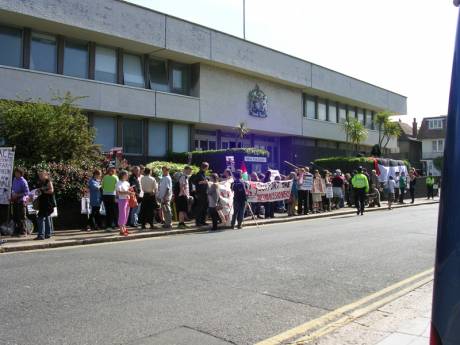 On the opening day of the trial, 7 June, defendants were greeted by a strong picket of the court. Around 60 people joined the protest, with about 20 from Bristol (including people from Bristol STW, Bristol PSC, Bristol ABC and other campaigners). The protest continued until around 1.30pm, when the jury were let go for the day and the court was closed to everyone except defendants and legal teams (apparently on security grounds as they watched cctv footage from inside the EDO factory). There is a report here from Bristol Indymedia, photos here, and a Guardian report here. You will find links to the Goldstone report in those articles.

In the meantime Elijah Smith remains on remand throughout the trial, being bussed in from Lewes prison daily. Letters of support for him continue to be welcomed – write to Elijah Smith – A3186AM, HMP Lewes, 1 Brighton Rd, Lewes, East Sussex, BN7 1EA. You may also wish to send supportive letters to Robert Alford – A1583AN at the same address.

Supporters are welcome inside and outside the court any day of the week. For other anti-EDO events see SmashEDO.