Campaign to support Renata
(Renata is a young Polish student and anarchist who has spent some time in the south of the UK involved in various campaigns and projects. After moving to Holland to pursue her interests, she ran into some serious shit. The following info has been circulated by some of her friends and supporters. There is plenty of background info to read here and here, and our previous report here). 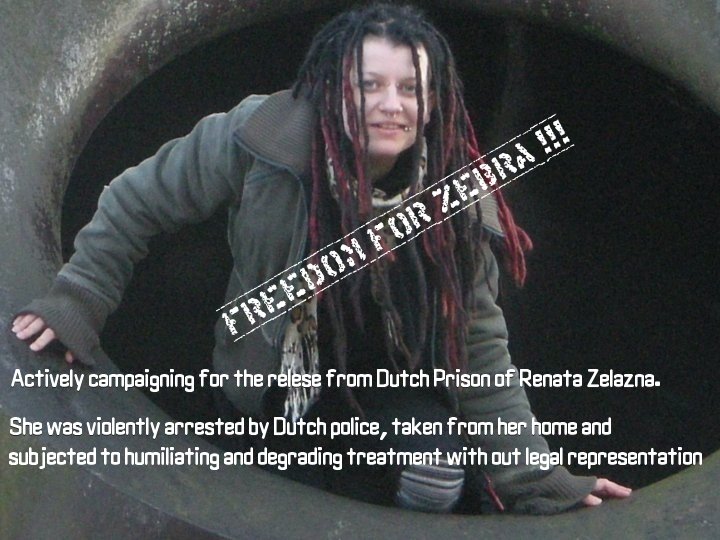 Renata Zelazna (aka Zebra) is a friend of ours, and a vegan and anarchist who is now on remand over an unfortunate chain of events. She was arrested in April 2010 in Holland where she had moved to study, after an altercation with construction site workers which ended up with police threatening her in her own flat. She was holding a knife that she was chopping vegetables with – leading to charges of attempted murder!

She was subjected to abuse on her way to and in custody – being beaten, denied vegan food, drink and basic sanitary needs, and even clothes – she was transported to prison naked from the waste down. She has also had problems getting adequate vegan food while in prison and has lost a lot of weight. She is facing up to 12 years in prison or a mental hospital, and is in need of our support.

Please write to her, she said that getting letters is really helping to keep up her morale:
Penitentiare Inrichting Ter Peel
T.A.V. Renata Zelazna 7138606 cel 1/10
Paterstraat 4
5977 NM Evertsoord
Netherlands

Raise money for her defence, and contact her support groups for more ideas of support:
UK: free.renata@ymail.com
Holland: info@arrestantengroep.org and this website. Sign the online petition!

Getting more character statements is important right now. The police are trying to accuse Renata of having mental health problems and saying that she is a danger to the public. We’d like to remind friends, family, people that know her or have worked with her to send character reference letters about Renata. We will collect them to send onto her lawyer. Her court case is on the 20th July so please don’t delay sending these letters to:
Free Renata Zelazna, PO Box 74, Brighton, East Sussex, BN1 4ZQ
Email to : free.renata@ymail.com

Please write to the Dutch authorities to complain about her treatment. Sample letter below:

I am writing to express my concern over the treatment of Renata Zelazna, a Polsih student living in Holland who is currently in custody and facing serious charges over a series of events that spiralled out of control.

Her arrest and treatment in custody were exceptionally threatening and abusive. Although she was being arrested over a minor incident – an argument with the construction workers next door – she was physically threatened and assaulted by the police in her own flat, who did not inform of her rights but immediately cornered her; she was in the middle of cooking and holding her kitchen knife, so this was turned into charges of attempted murder.

She was pepper-sprayed and subjected to physical violence during the arrest. She was not given enough water or any food that met her dietary requirements, and she was not given any sanitary products to deal with her period or an opportunity to clean herself or new clothes, leading to the humiliation of having to remain naked from the waist down
for some days, including during her transport to prison. There, she was held in isolation due to the generalised suspicision of TB just because of her nationality.

I am shocked and outraged to hear of this treatment and am urging you to release Renata and drop the charges.