Greece: Anti-fascist rapper and metal worker was stabbed to death by 25 neonazis on the night of Tuesday 17 September in the Keratsini area of Piraeus. 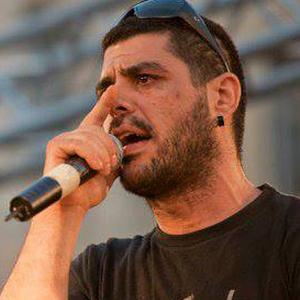 From eye-witness report: “Around 24:00 a group of 15-20 fascists, wearing black t-shirts and military pants and boots, was deployed on P. Tsaldari street. During that time, Killah P was walking with his girlfriend and another couple when he was spotted by the fascists shouting “what are you looking for here, you know there is no place for you in this hood”. The fascists hunted the two couples down P. Tsaldari street towards Gr. Lampraki avenue, where from another street, a new group of around 10 fascists came out and surrounded the guys. At that time, a car drove opposite in an one-way street, stopped, the driver came out and stabbed Killah P once in the heart and once in the abdomen (the stabbing on his abdomen had an upside-down “L” shape).

The whole scene took place in the presence of DIAS motorbike police, that only afterwards and only as soon as most of the fascists had already dispersed, arrested the murderer (according to some witnesses Killah P while still in shock kept pointing at the murderer and this is how the cops arrested him – a 55year old holding a knife, described by other eye-witnesses as a known Golden Down associate). The ambulance took 35 minutes to approach and Pavlos was pronounced dead at Nikaia general hospital.”

It is hardly surprising that the Greek police once again did nothing to prevent Golden Dawn nazi violence (Golden Dawn is largely supported by the Greek capitalists, the government and the church, as a willful thug against militants, workers and the poor, and more than half of the police vote for this openly neonazi party) if not actively participating in or covering the organisation of what looks as a death trap for a well-known radical, member of the metalworkers union and antifa hip-hop artist in a working class district, near the spot where a few days ago 8 members of the communist party (KKE) were also brutally assaulted by Golden Dawn nazis.

It is hardly surprising the silence of all the mass media, that are kept alive due to the government’s vast loans and benefits, that either decided to mention the assassination as a “fight after an argument about football” or to not mention it at all. They are the same mass media that promote every misanthropic Golden Dawn activity as an “opposition to the system’s flaws”, and lately as a realistic government partner for the future. They are of course the voice of their owners, the same few families of capitalists, owners of a shitload of shiptanks, banks and hotels that support the right-wing government and its thuggish little counterpart on the streets, the Golden Dawn, in what they see as a Golden opportunity to get rid of workers rights and turn Greece into a proper labour camp under the nationalist and religious kitsch.

It is worth noticing that this is a hard time for the government and their nazi counterparts, as even after their full scale assault on anarchists, squatters, and workers’ struggles, the movements seems to find again its momentum, with the current struggles of the teachers, the hospital workers etc.