Jock’s appeal against his sentencing/convictions for murder and attempted murder continued late into December 2010. His next court date is set for 19 January in Sofia, Bulgaria, when the judge is likely to hear pleas from both sides before retiring to consider his verdict – which may take a month or two? 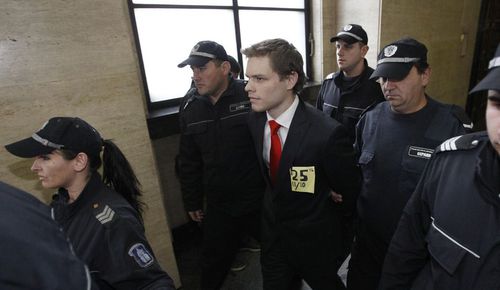 Jock stands strong on way to court on 25 November

Jock has now been locked away for over 3 years, but there is a glimmer of light at the end of the tunnel. Recent days in court have confirmed his version of events – that he went to the aid of 2 Roma who were being attacked by a gang, and was then attacked himself. Several cops and other witnesses have in fact now testified to this effect, although others continue to lie. Fairly reasonable reporting of the trial in the local english language Sofia Echo can be found here for recent court days – 11 November, 25 November, 22 December. Whilst this article idicates what prison is like for him. All are worth reading. The paper also carried a letter from the chairperson of the Bulgarian Helsinki Committee which effectively states the original trial was a travesty of justice that needs to be corrected!

A message from Jock posted on 6 January 2011 on Anarchist Solidarity reveals Jock to be bearing up well to the strain of the process and unchanging in his version of events. His criticisms of the court process and official corruption are sharp and to the point. Quote: “All objective and neutral evidence in my case has supported my statement from the begining. With only the statements of the gang conflicting, with not only my statement, but all if the evidence. It is more then evident that the Monov family have used their connections within the then governing Bulgarian Socialist Party to corrupt the judicial process. If the appeal court is not corrupt, there is more then enough evidence to find that I acted in defence of a racial minority being assaulted due to the colour of their skin, then acting in defence of myself. Any deviation from this ruling, is a display of corruption and disrespect for law, morals, society and justice.”

Jock goes on to acknowledge the support he has received: “Thank you for all the acts of friendship, support and solidarity, shown by friends, family and those concerned with social justice. Your constant support has not only brought the injustice to public light, but reminded me why I went to the defence of the 2 boys in the first place. It is human nature to care for each other even in the face of overwhelming odds. To all those who show their disgust of racism and corruption, thank you. We must not loose hope, not only for my case, but in the broader struggle against racism.” Read Jock\’s full statement

Self-defence is no offence – support Jock. Keep up the pressure on the Bulgarian authorities – read this post and see here for ideas of what you might do.