UPDATE: Read a report about the Decommissioners court hearing last Monday, by someone who was there.
Elijah ‘James’ Smith has been moved back to Lewes prison. Please write and send him your support and solidarity: Elijah Smith, VP 7551, HMP Lewes, 1 Brighton Rd, Lewes, East Sussex, BN7 1EA

Some good news today on the legal front for the EDO Decommissioners.

The 6 EDO Decommissioners from Bristol, along with the 3 campaigners from Brighton allegedly implicated in the case, were in court in Brighton today, 1 March,  to hear the judge rule on whether or not they could proceed with their defence. That defence is based on the arguement that whatever crime(s) they may have committed were justified by the fact they acted to stop a far greater crime – namely that by decommissioning the EDO MBM/ITT arms factory in Brighton they would contribute to stopping the Israeli state from bombing Gazan civilians during the attack in December 2008/January 2009. First reports from the court indicate the judge has ruled in their favour! But in a not unexpected twist, the prosecution have indicated they will appeal this judgement. Typical isn’t it, the bosses’ courts amazingly agree to let you actually argue a defence, but their mates at the CPS just cant accept there may be 2 sides to the story. If the prosecution do appeal, it will most likely to be to a higher court (than the crown court), and this could impact on the start of the full trial, meaning the start date of May 17 may be put back. Watch this space or the Decommissioners site for updates.

Any further delays would likely see the continued unjust treatment of the Decommissioner still on remand, nearly 14 months after the alleged crime. Elijah ‘James’ Smith has now been locked up continuously, without being found guilty by any court, since 18 January 2009. James was ghosted to HMP Elmley (Kent) in late January 2010, it is unclear yet if he is being sent back there from court, or somewhere else. Details to follow. 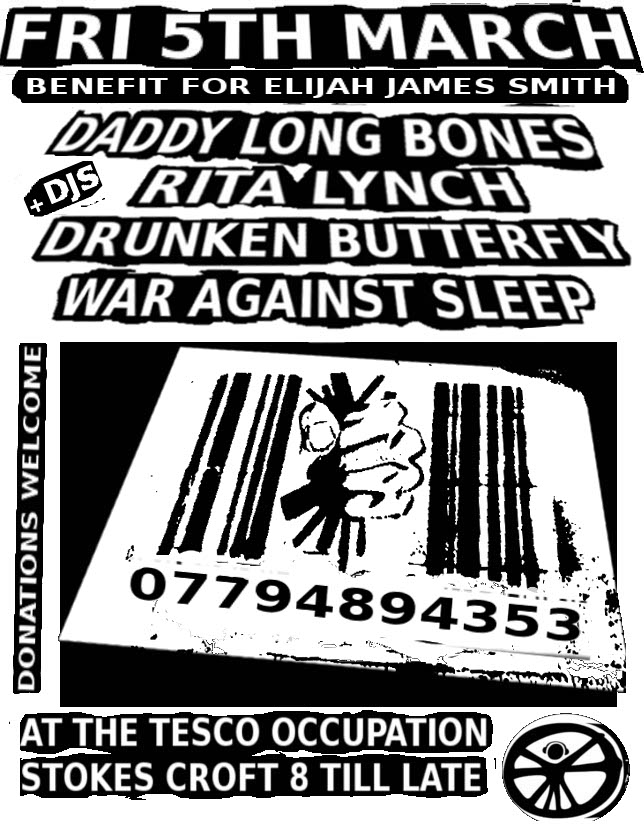 Meanwhile, supporters of James are holding another fundraiser this coming Friday 5 March to support him. Money raised will be used to continue sending James a weekly payment to enable him to buy the necessary items needed to make his time in prison a little more bearable. Its at the anti-Tesco occupation, 140-142 Cheltenham Rd, Stokes Croft, from 8pm, donations on the door are requested – see image for details.

Lastly, if you haven’t read it yet, check out the pamphlet ‘If I Had a Hammer – Decommissioning the Arms Trade’. You can read it online or download it here.