Whilst in the UK it seems cops never get done for killing members of the public like Ian Tomlinson (UK G20 protests), in the USA they kill so many that occassionally one goes to trial. But that doesn’t mean justice is done. Obama’s election has just meant business as usual! News just in from OccupyCalifornia via Denver ABC (links include video footage):

“OAKLAND, California – As of 9pm on 5/11/10, around 153 people have been arrested around East 18th St and 6th Ave in Oakland following the sentencing of Johannes Mehserle. The former BART cop was given 2 years for involuntary manslaughter – minus time served – for the murder of Oscar Grant. Mehserle may be released in as little of 7 months. The judge presiding over the trial decided not to apply a firearms enhancement charge, which would have added 14 years to the sentence. The police immediately declared the organized march unlawful and began trapping the crowd for mass arrest. At least one National Lawyers Guild legal observer has been arrested. During the march, protesters smashed shop and car windows, and one man was arrested for allegedly unholstering an officer’s gun and pointing it at him. 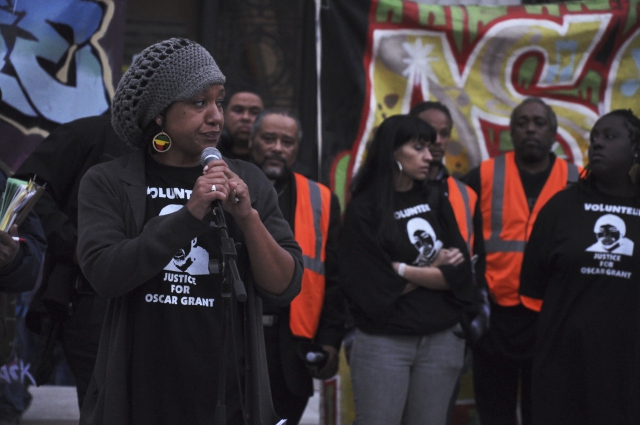 speakers at organised protest before cops try it on

According to several observers, police did not issue a dispersal warning (and allow protesters to leave), but in fact corralled protesters and even some observers and then serially arrested them. One witness that had followed the crowd through out the course of the evening explained that as the marchers left downtown Oakland, they began to head towards the Fruitvale BART station where Oscar Grant was murdered. Repeatedly, police blocked the marchers off, riling the crowd. At one point, as the crowd passed Laney Community College, the police cut them off in an attempt to summarily arrest the entirety of the crowd. In response the bulk of the crowd tore down a temporary fence and scrambled through a construction site to circumvent an assured arrest. It was only later, after a string of antagonizing by police, did some marchers get arrested.

Update: Some, if not most, of those arrested last night are being released today. According to what the police at the jail were saying, the number of people arrested may be closer to 250 or even 300.