As we speak, Iceland’s first post-collapse trial is taking place. To no-one’s surprise, the accused are individuals from the most radical part of the uprising that toppled Iceland’s government during the winter of 2008 and 2009. The people – anarchists and radical leftists – are now facing somewhere between 1 and 16 years in prison, will they be found guilty of attacking the parliament.

On December 8th 2008, a group of 30 people planned to enter the Parliament gallery but was met with a tough response from the Parliament’s guards. According to Iceland’s constitution, everybody can enter the Parliament gallery to follow parliamentary sessions. Therefore it was not only their natural right, as the opponents of current powers, to enter there – but also their legal, constitutional right as members of this society. Only 2 out of the 30 people managed to get there; one of them shouted at the MP’s to get out of the building. In reaction, the people were held hostage by police and Parliament guards, few of them arrested and brought to the police station. A year later, accusations were filed against 9 of them. 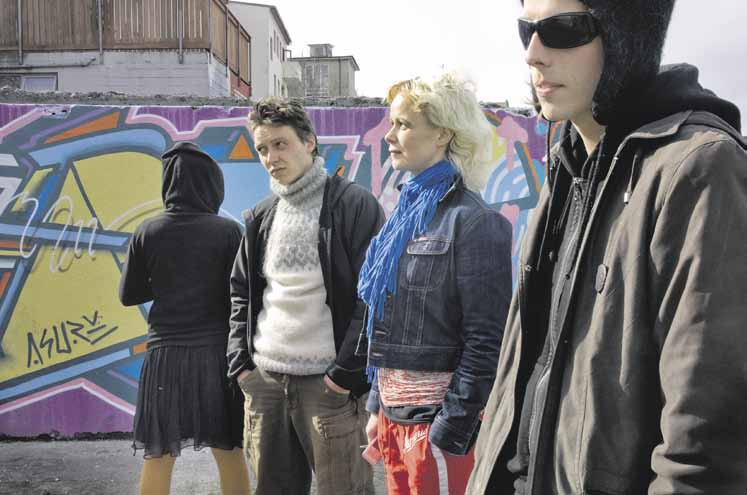 Between One and Sixteen Year in Prison The Reykjavík Nine (Rvk9) are accused of violating the government authorities, disrupting public order, committing and threatening violence against official workers, leading an organized attack, housebreaking, disrupting a legal meeting and last but not least, threatening the Parliament’s free will. The last mentioned law article – which takes on attacking the Parliament and demands somewhere between 1 and 16 years prison sentence – has been used only once before in the history of the Icelandic state. That was in 1949 when the police and right wing extremists beat up people who rioted by the parliament, protesting Iceland’s entrance into NATO. Of course, it were the NATO opponents who got sentenced, including an official deprivation of their human rights.

Since the court case was originally filed in January this year, many hearings have taken place. One of the Rvk9’s lawyers has systematically shown the witch-hunting nature of the case, as well as the police’s and judge’s favoritism. Of course that should be obvious to everyone with a critical mind. But if anyone still had doubts about it, the lawyer and other opponents of the Rvk9 case have very well exposed the false neutrality of the state institutions.

A big group of policemen have been present in the courthouse at every hearing, by the demand of the judge and chief judge. Looking back to the history of court cases in Iceland, this police presence is unique and shows the judge’s assumption about the threat caused by the defendants and their supporters. Thus he has already taken a stand. Early on, the police stayed behind the curtains but parallel to the public increased interest in the case, the judge and chief judge have handed the authority of the trials to the police. The police has therefore guarded the doors to the courtroom and only allowed entrance to as many people as there are chairs in the room. Later on, the police has formed a wall in front of the courthouse itself and only allowed a handful of people inside. Couple of the defendants have undergone violence and had problems with entering. In one instance, two of them were not allowed into their own trials and despite repeated demands, the judge has not secured that this will not happen again. The police presence has only thrown oil on the fire of rage against the trials, which has resulted in rioting and several arrests.

The Silence of Media and Authorities Corporate media has of course played its part in the case  – actually since the original event and arrests happened in December 2008 – which is to sentence the Rvk9 beforehand and create a negative public opinion. The case’s opponents have on the other hand managed to show the absurdity of the trials and the witch-hunting nature of it, by pointing at the zero gravity of the accusations and by putting the events in context with the 2008-2009 revolt and that time’s social conditions. The judicial system’s one-sided aim has been properly exposed.

The criticism has been pointed towards the roots of the case – the hierarchy of the so-called democratic society – and its opponents have increased. That was seen in the signatures of more then 700 people who announced that they had also “attacked” the parliament that same winter and demanded that the case would be dismissed. The media editors’ reaction to this progress has only been shown in one way, with bitter silence. Now they only talk about the case to bring forward lies, purposely to criminalize the defendants and their supporters.

But the media is not the only one who keeps silent. The first agent of this case, parliament itself, has shut its mouth – at least on the official side. Thus the parliament’s speaker refused to accept the 700 signatures and said that the case and the signatures had nothing to do with her job. Still, she saw nothing wrong with contacting a well known philosopher who had voiced his opinion about the court case in a radio show, ticking him off and accusing him of misstatements. Asked about her interference, she did not want to answer and the same has applied to the reaction of any spokesperson of the parliament and or the prosecution, when asked critical questions.

Increased Support and Solidarity The media’s and authorities’ attempts to silence the resistance and create as negative impression as possible of the defendants, has not gone down very well with the public. In May, many well known and mainstream musicians played on a big outdoor concert in support of the Rvk9. The concert took place on the square in front of parliament, the same as where the 1949 NATO riots and the 2008-2009 protests took place. In July, a similar event took place in Reykjavík’s Living Art Museum, where many artists showed their objection to the prosecution and Iceland’s state. The support, which comes from many different directions of society, has not dwindled despite the Rvk9’s and their supporters’ radical criticism and analysis of the system. It has rather increased and gotten beyond Iceland’s borders, which could e.g. been seen in a big solidarity protest by Iceland’s consulate in Barcelona, July this year.

In the end of August, four of the defendants demanded that the judge would resign because of the favoritism and subjectivity mentioned here above. The judge pronounced his own qualification and few days later, the supreme court confirmed his decisions, despite the heavyweight reasoning of the defendant’s lawyer. During last hearing, September 8th, the same defendants demanded that the state prosecutor would resign because of her close connections with the “victim”, but she serves a job for the parliament, within the Central Bank. The verdict on that will be announced soon and by that time, the principal proceedings will start if the demands will not be met.

The Rvk9 and their supporters need all forms of international solidarity, be it articles and translations, spreading the word, demonstrations or any other ways to show an opposition to Iceland’s state repression. A list of Iceland’s embassies abroad can be found on the web of Iceland’s Ministry for Foreign Affairs.

More detailed information about the case and further news can be found here.

Against all state repression! Free the Reykjavík Nine!

Down with the Icelandic State!