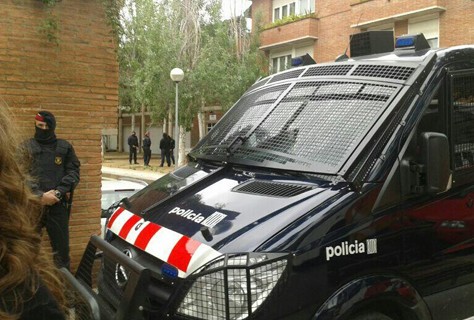 From comrades in Barcelona we have been informed that five members of ‘Black Flag’ have been detained in dawn raids on the anarchist-syndicalist CNT centre in Sabadell near Barcelona, Spain. They are accused of belonging to a terrorist group. The Police broke into and searched the Anarchist Workers Centre (Ateneo Libertari) in Sabadell. The operations included another raid and search in Sabadell and two more in other municipalities in Catalonia, one of them in Avignon (Bages County). On the same day police evicted the Can Piella ‘Land and Liberty’ squat. International solidarity is requested.

UPDATE: a statement from the FIJL (Federation of Iberian Libertarian Youth) has been released and is published below at end of article.

Thirty Mossos police have now taken over the anarchist centre in Sabadell, after smashing down the door down before 9.00 a.m. according to a member of the CNT union that occupies part of the premises with Bandera Negra (‘Black Flag’). The ‘Mossos’ – whose origins are military – have a long history of carrying out beatings in police stations and it is hoped comrades will not be harmed.

The Ateneo de Sabadell, which is owned by the CNT, is a space open to all working people of Sabadell, which many groups and people from Sabadell and elsewhere have used for recreational, cultural and social events over many years. Other citizens of the city, including the 15M Take The Streets movement and Occupy, make use of the building and have begun demonstrations in support of the five arrested. The premises at Sabadell have now been sealed off.

The following statement has been received regarding reports of five anarchists arrested on ‘terrorism’ charges after a raid by Mossos police, yesterday, on the premises of the Ateneo Llibertar in Sabadell, near Barcelona, Spain.

Today, the information our group has received through Catalan comrades is that the High Court has issued several arrest warrants, five in all, but when we write this statement , they can confirm only one. The media, meanwhile, have been devoted to half-truths. Because the name of our group (and the link to our old blog) has been widely reported in the media and social networks (and using our seal and other graphic allusions to our group) we want to clarify that the Madrid ‘Bandera Negra’ (Black Flag) Group are part of the Iberian Federation of Libertarian Youth, though for obvious geographical reasons we have nothing to do with the group in Sabadell that were kidnapped by police on Wednesday 15. This is surely obvious to anyone who pauses to compare the information – at least to see that the territorial scope of our group is limited to Madrid.

That said, we give our complete solidarity with the arrested person (we insist that we know that so far there is only one) as well as any others who are involved with Llibertari Ateneo de Sabadell and who have been kidnapped by the Mossos d’Esquadra by order of the Court. As far as we know, this whole mess is due to a fragile Facebook page and consequent charges of praising terrorism. This has served as an excuse for the state mercenaries to enter the Libertarian Ateneo de Sabadell and steal various materials as well as sow fear and doubt in the Catalan anarchist movement and the rest of the state territory. This the State shows its hard face again and treats us to a show of force to remind us that it retains its full power and repression, ready to fall on anyone who questions the logic of this system and dares fight back.

The media has followed a recognisable pattern in recent years in trying to criminalise anarchism with arrests and the slandering of anarchist militants. A constant barrage of press and television reports has described us as terrorists so as to provide targets and so legitimise repression in the eyes of the public. Press, police and judges act in unison to isolate, criminalise and persecute the anarchist ideal.

Again, the National Court exposes its fascist, totalitarian origin, pursuing dissidents against the authoritarian regime in which we live. For over a year, harassment and arrests by the Spanish State have been carried out against the anarchist movement and this harassment has increased exponentially. With regard to the many arrests that have happened in Barcelona since the strike of 29-M, all arrests and fines have been against anarchists. Therefore, we continue to denounce repressive actions of the state and its tools in its attempts to exercise ever greater social control, such as via schooling (which is also an indoctrinating element), via the magistrates, via the police and via the media. We will continue to denounce their repressive role and continue to fight for the freedom of all prisoners and against any authority.

For us repression is the logical reason behind these threats. But we refuse to accept the role of helpless victim and pretend to be perfect citizens who have never broken a plate. We are anarchists and we put our emphasis on propaganda and cultural diffusion, but we also believe in the need to fight against all that oppresses us, outside parliament and other institutions of the system. Solidarity and direct action are both theoretical and practical approaches with which we function day to day. We will not bow down. We will respond.